Flying Shot kicked off Women’s Circus year in circus style with the space bursting into a hive of creative activity after two long years of fits and starts. 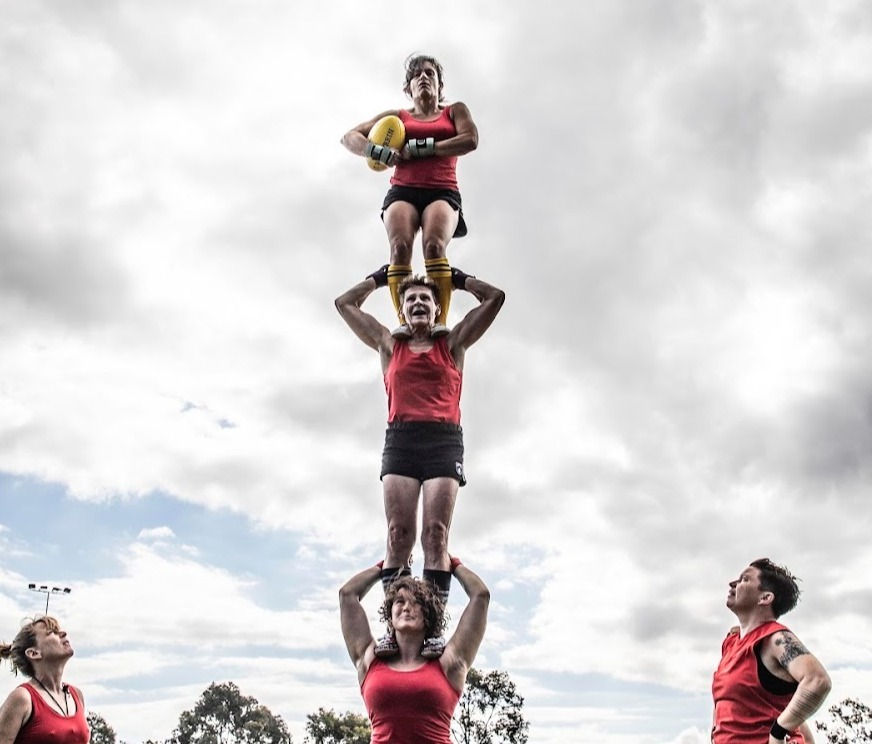 Led by a team of world-renowned circus and theatre makers, Women’s Circus trainers and Members joined forces for the creative development of Flying Shot. Over three short weeks in February, the core creative team explored the exciting possibilities of footy and circus colliding with director Susie Dee and Writer, Melissa Reeves.

The tireless team worked on the floor and field, as well as deep diving into the world of footy. Thanks to the generosity of local AFLW legends, they tried their hand at a training session with the ever-inspiring Sunshine North Football Club’s women’s team The Road Runners, attend a Q&A with VFLW coach and podcaster Lisa-Kiwi Ropere, and watch an AFLW match at Victoria Park.

The development led to the creation of a fun-filled half hour show based around the newly formed fictional champion team ‘The Eternal Flames’.

Members of Women’s Circus passionate acro crew were invited to connect and create with this renowned circus team through a devising workshop run by Sharon Gruenert, Spenser Inwood, and Sal Frances. This supporting crew became the show’s enthusiastic flag-waving referees. 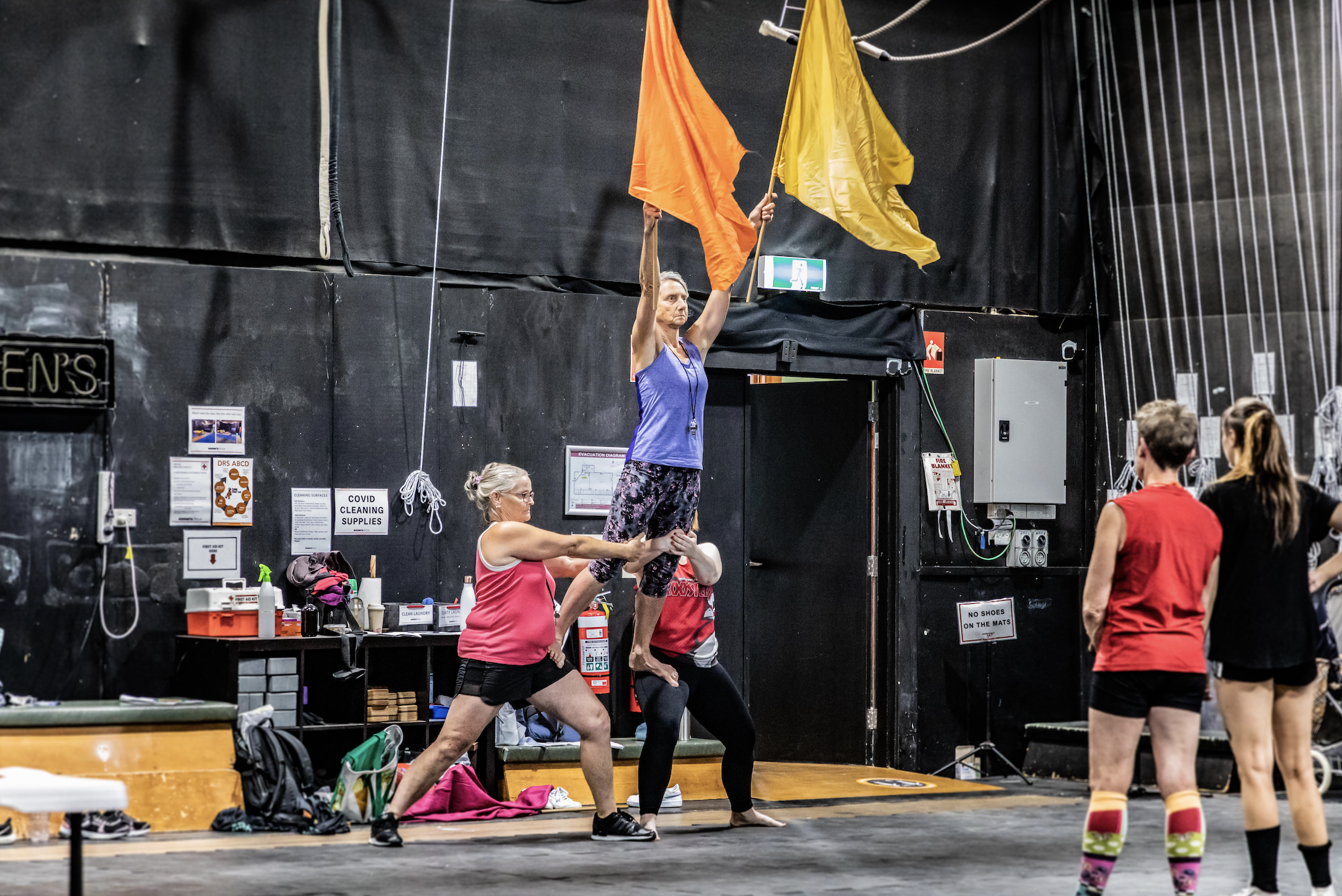 For some of the participants this was their first time being involved in any sort of creative devising process and was a wonderful opportunity to get hands on experience.

“The openness and support provided by Sal, Sharon and Spencer – I felt immediately validated and included as a valued participant in the devising process, which fostered a sense of adventure and safety to extend my self physically” – Women’s Circus acro member

After an intensive three weeks an enthusiastic audience joined this creative powerhouse team for an exclusive showing filled with lots of fun and laughter.

Audiences were welcomed into Women’s Circus training space by local community-based music group the Sunshine Street Band, who set the tone of the day’s proceedings with the Western Bulldogs’ team anthem ‘Daughters of the West’.

Image: ‘The Flames’ in action.

‘The Flames’ gave their all with a series of ‘behind the scenes match preparations’ and hilarious ‘warmups’ before moving over to the Whitten Oval for the team’s inaugural match.

Audiences were wowed by the astounding athleticism of these acro footy champions, and the team and community finished the day feeling victorious with hearts full. 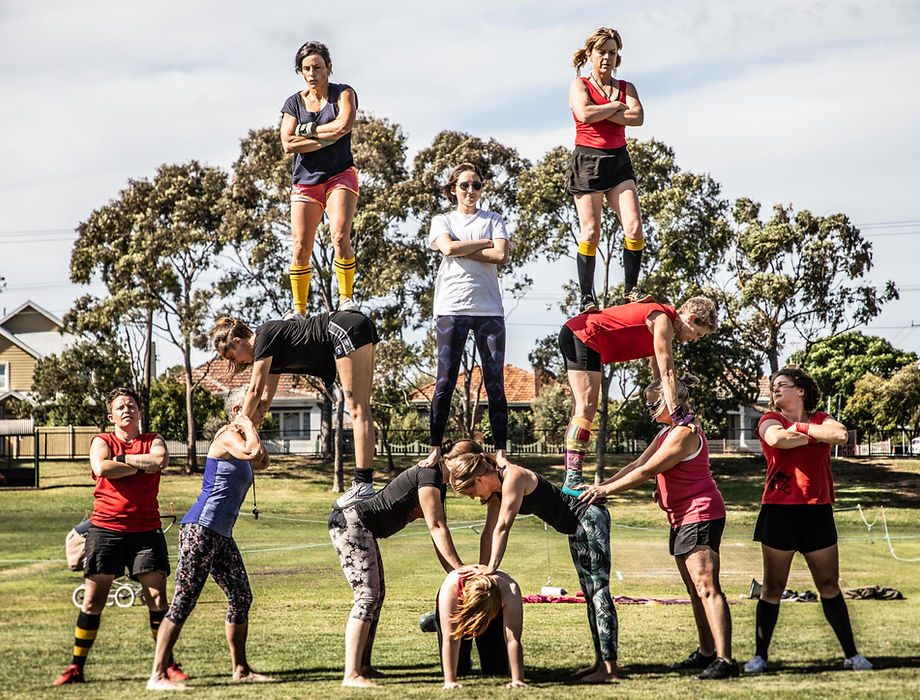 While Flying Shot is still in development, initial feedback from the full house on showing day points to it being everything the team hoped – a spectacular and comic outdoor show challenging gender expectations, and bringing sport, art and the community together in a celebration of gender diverse athleticism.

Women’s Circus is continuing to partner with Creative Producer and Co-creator Antonella to further support the development of Flying Shot. Antonella is working hard to see a more polished version of this bold new work, and more outdoor performances.

WATCH THE TEAM IN ACTION + HEAR FROM THE CORE CREATIVE TEAM.